See our new guide to dementia

‍Dementia is a term that is used to describe a set of symptoms which are caused by various diseases. Most commonly, dementia refers to the loss of memory and other cognitive abilities that get worse over time. These diseases are referred to as “cognitive” because they impact thinking.

Dementia is not just about memory loss; it is about losing the ability to think clearly, manage stress in your life, retain new information, and more.

Read this article for more information about dementia and its different forms, diagnostic tests for detecting it early on, available treatments and prevention methods against it.

As people age, they are more likely to experience memory problems and other cognitive changes that are often mistaken for the onset of dementia. Some of the most common conditions that are mistaken for dementia are depression, anxiety, vitamin B12 deficiency, hypothyroidism, vitamin B1 deficiency, and hyperthyroidism. Age-related cognitive changes are often referred to as “age-associated cognitive decline” or “normal ageing,” and are not as severe as dementia.

Dementia is a general term for a decline in cognitive function severe enough to interfere with daily life. There are many different types of dementia, each caused by different diseases and health conditions.

In general, two types of dementia are recognised:

Each type of dementia has its own set of symptoms, causes, and prognosis.

They can be broken down into three major categories:

People with vascular dementia may also experience personality changes, mood swings, and altered sleep patterns. Vascular dementia can occur at any age, but it’s more common in people over the age of 60.

Frontotemporal dementia (FTD) damages the frontal and temporal lobes of the brain, which are responsible for decision-making and regulating emotions. This type of dementia begins with personality changes and behavioural issues, followed by cognitive decline. Frontotemporal dementia is caused by the degeneration of neurons in the brain, typically due to abnormal protein build-up.

There are two types of frontotemporal dementia:

Alzheimer’s disease is the most common form of dementia. It is estimated that around 50% of people with dementia have Alzheimer’s. The most common misconception about Alzheimer’s is that it only affects older adults. In reality, it can occur in people of all ages, and the risk increases with age. Alzheimer’s is a type of dementia that causes problems with memory, thinking, and behaviour. It is caused by abnormal protein build-up and a decrease in the ability to create new memories. Due to this fact, people with Alzheimer’s often have trouble remembering things that happened recently, as well as important life events.

Lewy Body Disease (LBD) is a type of dementia caused by protein build-up in the brain. It is one of the most common forms of dementia that is not related to Alzheimer’s. The most common symptoms are visual hallucinations, sleep disturbances, and cognitive decline. LBD is caused by abnormal protein build-up in neurons, which interferes with their ability to function properly. This can cause a variety of symptoms that affect the cognitive, behavioural, and emotional health of the person. Due to this, LBD can be difficult to diagnose and the progression is different for everyone.

Awareness and early detection of dementia

Early detection and diagnosis of dementia can help minimise its impact on the future of the patient. There are some simple tests that can detect dementia in its early stages.

Some of these include:

There are several different kinds of memory tests that can help determine if a person has dementia or not. These include:

There are no specific treatments for dementia, but there are remedies  that can help with the symptoms that come with the disease.

There is no definite way to prevent dementia, but there are certain lifestyle choices that can lower your risk of getting it.

Support for people with dementia and their families and friends

There are several excellent organisations that can support people with dementia and their families.

Dementia UK is a national charity that provides advice and support about dementia.

Alzheimer’s Society has a dementia directory to find support near you. And their Dementia Friends initiative is about learning more about dementia and the small ways you can help. From telling friends about the Dementia Friends programme to visiting someone you know living with dementia, every action counts.

Maclntyre have support on dementia on their website and have a Dementia Special Interest Group.

See the NHS guide on dementia.

There is excellent support for carers in the area from Carers Central in Luton, Carers MK and Carers in Bedfordshire.

Our team can help you find local support for people with dementia. Please contact us to discuss how we can help you, which may include arranging a free appointment with our Benefits Advisor. They are an expert in helping people with claiming benefits for disabled people and people with long term health conditions.

Come to our mobility equipment shop in Dunstable

We can provide advice and also stock a range of mobility aids, if you need help getting around, including a variety of:

Visit us at our mobility equipment shop at the Mayfield Centre, 4 Mayfield Road, Dunstable, LU5  4AP.

We are here for you…

Click the pink ‘Chat with us’ button below, open 10am to 4pm Monday to Friday.

A change of scenery is good for us so we compiled the many excellent places to visit across Bedfordshire that are free to enter and wheelchair accessible.

Spotting the early warning signs of cancer can save lives

Read the signs and symptoms of cancer from the NHS website…

See our new guide to dementia

Read about dementia and its different forms, diagnostic tests for detecting it early on, available treatments and prevention methods against it. We have included some links to local support groups and organisations for carers in the Milton Keynes, Luton and Bedfordshire area…

We have both self-propelling chairs (with large rear wheels) and attendant-controlled chairs (four small wheels, helper to push)…

How to apply for PIP

Read all about claiming PIP in our quick guide. Our charity team can help you fill-in your application form and support you with choosing mobility equipment… 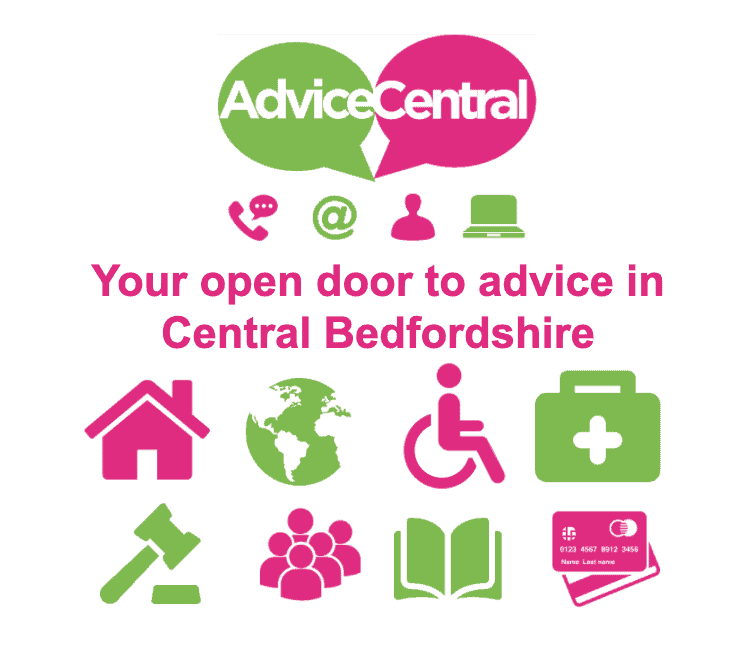 Your open door to advice in Central Bedfordshire

AdviceCentral helps residents of Central Bedfordshire to find the best local and national advice on a wide range of topics including:

Help for carers in Luton

We offer lots of free 1-2-1 help and advice by phone, email and online meetups.

Please donate to our charity

Please consider donating to The Disability Resource Centre today so we can continue our vital services.

Our charity is here to help you if you live in Bedfordshire, Luton and Northamptonshire.